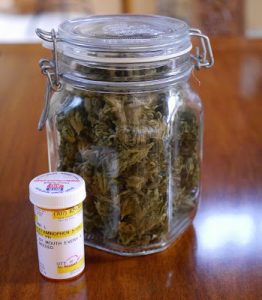 Dr. Donald Abrams, chief of the Hematology-Oncology Division at San Francisco General Hospital and a professor of Clinical Medicine at UCSF.

Dr. Dustin Sulak, founder of Integr8 Health, an integrative health practice with 3 locations in New England that treats over 18,000 patients with medical cannabis.

The most exciting development from this conference, for me, was learning more about the interaction between opioids and cannabis and the enormous potential this has to help reduce the opioid epidemic in this country. My interest was already peaked by Dr. Sulak’s article I had read in O’Shaughnessy’s Journal of Cannabis in Clinical Practice. So it was really great to hear him discuss this in person, especially with all of the experience he has with cannabis patients. And with his practice in Maine, he is no stranger to the opioid and heroin epidemic and the urgent need to address it.

The Problem
Opioid medications are handed out like candy. In 2012, 259 million prescriptions were written, enough to give every adult in the U.S. their own bottle of pills.

The problem is that when a person has surgery, or a back ache, or other forms of pain, their doctor prescribes them a pain reliever such as oxycodone, hydrocodone, codeine, or morphine. These drugs have many bad side effects, but the ones that are key here are:

* they are addictive
* people develop a tolerance to them, requiring them to increase their dosage
* they can cause respiratory depression which can lead to death
* as pain pills became harder to get, many turn to a more potent and cheaper opioid, heroin

How Cannabis can help
Like opioids, cannabinoids (the chemical compounds found in cannabis) can reduce sensitivity to pain. In animal studies, cannabis added to opioids increased pain relief significantly more than the opioids alone. In addition, co-administering cannabis with opioids prevents tolerance building. What this could mean for humans is:

* a person could take a much lower dose of opioids if they take a little toke of cannabis
* they may not have to increase their dosage of opioids as the cannabis may prevent tolerance
* Cannabis is also safe because unlike opioid receptors, cannabis receptors are not very prevalent in the brainstem’s cardio-respiratory center and does not increase the risk of respiratory depression or overdosing. No one has ever died from overdosing from taking too much marijuana.

Because cannabis is classified as a Schedule 1 drug, most of this research is still only confirmed by animal studies. As great as it is to prevent our rat population from opioid addiction, it would be far better to be able to prove this benefit in humans. Hopefully cannabis, with its many medicinal benefits will be rescheduled so this research can be done in the United States.

Some anecdotal accounts shared at the conference confirm these findings. Dr. Sulak described a patient who never needed to increase his small dosage of pain killers over a ten year period despite the severe chronic pain for the which it was prescribed. When the good doctor pointed this out, the patient readily pulled out a big joint from his pocket!

Recently my son had knee surgery and I’m sure went home with a big bottle of prescription pain killers. Luckily he lives in Oregon where cannabis is legal. He was able to completely control his post-surgical pain with cannabis alone. He didn’t get addicted to it (he much prefers bourbon) and had a speedy recovery.

A group of researchers in Canada published a paper “Cannabis for the Management of Pain: Assessment of Safety Study” in the Journal of Pain where patients using an average daily dose of 2.5g of dried herbal cannabis a day for one year showed improvements in pain, function, quality of life and cognitive function.

Last year an article by Dr. Kevin Hill in The Journal of the American Medical Association reviewed the medical literature over the past 66 years and found that “the use of cannabis for chronic pain, neuropathic pain, and spasticity due to Multiple Sclerosis is supported by high-quality evidence.”

Can Cannabis Cure Addiction?
We’ve discussed how cannabis can safely potentiate the analgesic effect of pain killers and how it can reduce pain all by itself. But can it cure someone who is already addicted to opioids?

This is certainly a critical area that needs far more research. But there are doctors who have shown that it can.

For example, Dr. Gary Witman of Canna Care Docs claims that he has successfully treated 15 patients with cannabis who have weened themselves off of opioids without relapse. And some individuals have told their own story of successfully using marijuana to cure their addictions.

Most states with medical marijuana now allow addiction to be on the list of qualifying conditions, showing the willingness to consider this as a viable treatment option. Maine Representative Diane Russel asked, “why take a solution off the table when people are telling us and physicians are telling us that it’s working?”

The irony is not lost when cannabis, a supposed “schedule 1 drug that, by definition, has no medical benefits” can help prevent and potentially cure drug addiction caused by legal pharmaceutical drugs.

Herbal Medicine brought to you by Mother Earth